Escape into the mystery, romance, and political intrigue of the Hill Vampire vineyards. Dangerous and seductive, the suspense will grab you and not let go… 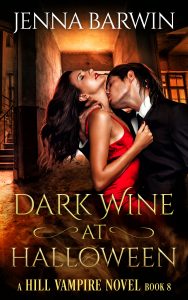 After Henry and Cerissa discover a two-day-old vampire in the last place they expect to find one—a Halloween funhouse—they have no choice but to hand him over to the town council who will decide whether he lives or dies.

At almost eighteen, the youth didn’t ask to be turned and hates being a vampire. As heart-wrenching as his situation is, the Hill can’t endlessly accept new residents.

Placed under house arrest until his fate is decided, the teen bites Cerissa while seeking her help to escape the community’s walls, and Henry’s jealousy flares. Then an ex-girlfriend of Henry’s suddenly appears in town, and Cerissa fights against her own green-eyed monster.

With dead bodies stacking up in a neighboring city, Henry and Cerissa must pull together to help the teen accept his situation and recover his memory, so they can identify and stop the crazed vampire who turned the teen—before he or she kills another mortal.

If they don’t, the killer’s actions might reveal to mortal police the wicked truth: vampires really do exist…

What reviewers are saying about Dark Wine at Halloween:

“It’s the wondrous breadth of humanity in all its loathsome depravity and compassionate splendor that draws me in to Jenna Barwin’s stories. Dark Wine at Halloween is a perfect example. I am captivated.”
~Sharon Bonin-Pratt’s Ink Flare

Want to know when book 9 of the Hill Vampire series, Dark Wine at  Dawn, goes is released?  Sign up for Jenna Barwin’s newsletter by clicking here.