We’re Giving Away Kindles! One Each Day!

Who needs to stand in lines on Black Friday or wait until Cyber Monday to score bargains? Not you.

And while you’re browsing the sale, be sure to play our Scavenger Hunt game for your chance to take home a Kindle Fire 7. We’re giving away a Fire to one lucky winner each day of the sale!

No purchase necessary.  Void where prohibited. Click the link for official rules.

Look for Books from Your Favorite Authors! 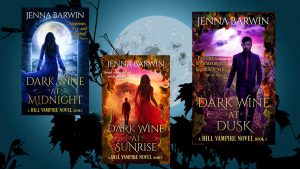 To celebrate the release of Dark Wine at Dusk,  Jenna Barwin is sponsoring a giveaway as part of her blog tour!

The four prizes being given away are:

The entry form is at the bottom of the blog post. Giveaway ends on June 25, 2019. No purchase necessary. Void where prohibited. One prize per entrant. See Giveaway page for full terms and conditions.

A seductive spy. An alpha vampire. A hidden threat to their love…

When a rogue vampire group attacks again, Dr. Cerissa Patel’s happily ever after with the man of her dreams must take a back seat to her mission.

Her lover, vampire Henry Bautista, is quick to pick up the gauntlet. He’ll do anything to help his beautiful spy capture the conspirators who are determined to enslave mortals.

But as Henry’s secret past rears its ugly head, it not only threatens their mission, but risks their love—and their very lives.

Dark Wine at Dusk is the latest in the Hill Vampire series. Reviewers are singing its praises:

“The chemistry between Henry and Cerissa will keep you turning the page. Powerfully written and totally unputdownable!” ~A ‘Wishing Shelf’ Book Review

“With a superb plot and its edgy narrative, Dark Wine At Dusk is sure to be well received by discerning fans of the genre and is recommended without reservation.” ~BookViral Book Reviews

Get it now on Amazon.

Dark Wine at Sunrise has been nominated for a 2019 RONE award for paranormal romance. Only five nominees will move into the finals. It’s up to the readers to decide who will be the finalists.

To vote, you must subscribe (for free) to InD’tale Magazine. If you are new to them, they are a great indie publication. If you are registering for the first time, they will email you—be sure to click the link in the email to complete your registration, or your vote won’t count. Thank you!!! 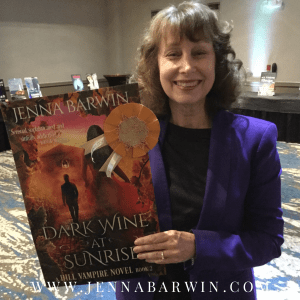 At the 2018 OCC RWA Birthday Bash, Dark Wine at Sunrise received the BEST TITLE award. The Orange County Chapter of the Romance Writers of America (OCC RWA) holds its annual meeting in October, and this is the second year they’ve given the award. 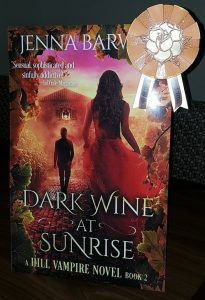 Dark Wine at Sunrise is the second book in the Hill Vampire series. Escape into the mystery, romance, and political intrigue of the Hill Vampire vineyards. Dangerous and seductive, the suspense will grab you and not let go.

Then put on your party dress, chill your favorite beverage, and be ready to go on Friday, August 10 from 6-9 pm (Eastern Standard Time).

You can RSVP “Going” HERE

My good friend Tena Stetler is celebrating the release of An Angel’s Unintentional Entanglement in her A Demon’s Witch series!

She’s invited me and a whole slew of other paranormal and fantasy romance authors to help her kick off the launch.

Join us for a night of games, fun and giveaways!

And if you can’t make it on time, don’t worry – the giveaways will remain open until 10 am PST on August 11, 2018. So stop by even if you’re fashionably late!

No purchase necessary, winners will be chosen by random drawing, go to the party for the rules, void where prohibited, giveaways not affiliated with Facebook.

Enter the FIERCE FANTASIES GIVEAWAY and you could win a Kindle Fire 7, one of four Ebook Prize Packs, or one of two Amazon Gift Cards.

Do you want to hear about new releases, and receive special announcements, exclusive excerpts, cover reveals and other FUN stuff? Don’t miss out on special offers for fans of Jenna Barwin! To sign up, go to: https://jennabarwin.com/jenna-barwins-newsletter/ 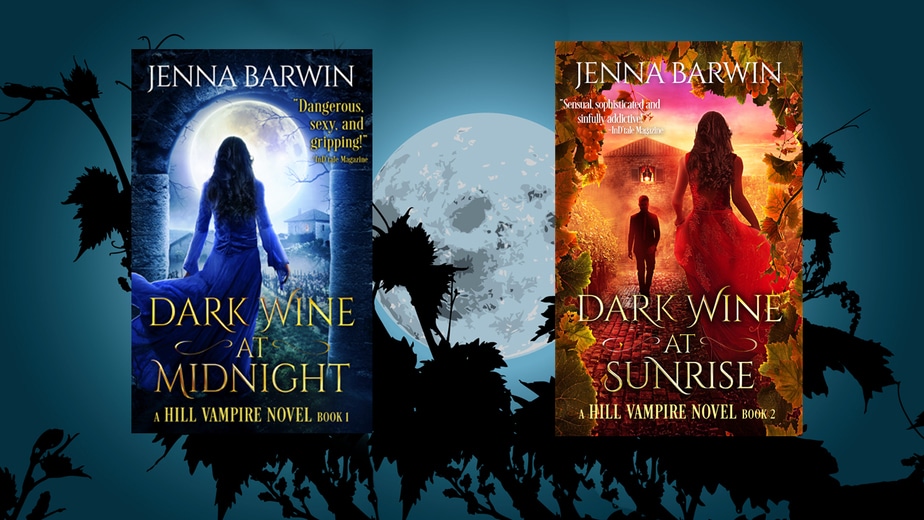 Want to find out what happens next with Henry and Cerissa? Dark Wine at Sunrise, book 2 in the Hill Vampire series, released today! You can buy the eBook or read on Amazon in Kindle Unlimited, and print books will be available soon.

Research scientist Cerissa Patel has only one desire: to feel her lover’s fangs slip into her neck for the very first time. Once they become blood mates, no one can keep them apart.

But it’s never that easy.

Cerissa’s relationship with vampire Henry Bautista violates a centuries-old law, and the town council wants her banned from their secret community. If they have their way, she’ll be separated from Henry forever.

As if that isn’t enough, Henry is still in danger. The would-be assassin lies in a coma, and Cerissa is no closer to knowing who targeted Henry—or why.

To make matters worse, her own people forbid her from becoming a vampire’s mate. They aren’t sure what Henry’s bite will do to her and want her focused on her original mission: tracking down the vampires behind a ruthless movement to enslave mortals.

Against these odds, Cerissa must find a way to bond with the man who holds her heart, and do so without paying the ultimate price – the loss of her wings forever…

I hope you enjoy Dark Wine at Sunrise!

Want to find out what happens next with Henry and Cerissa? Dark Wine at Sunrise, book 2 in the Hill Vampire series, releases March 14th! During the preorder period, it’s on sale for $2.99. After release, the price will go up to $4.99. Grab it now at a reduced price!

And of course, it’ll be in Kindle Unlimited for at least 90 days. Add it to your queue and starting reading on March 14, 2018!